Many of you may know that we opened a second location several years ago.  However, not many of you have had the opportunity to drop by or meet its great staff, so we put together this short video to give you a quick look inside: 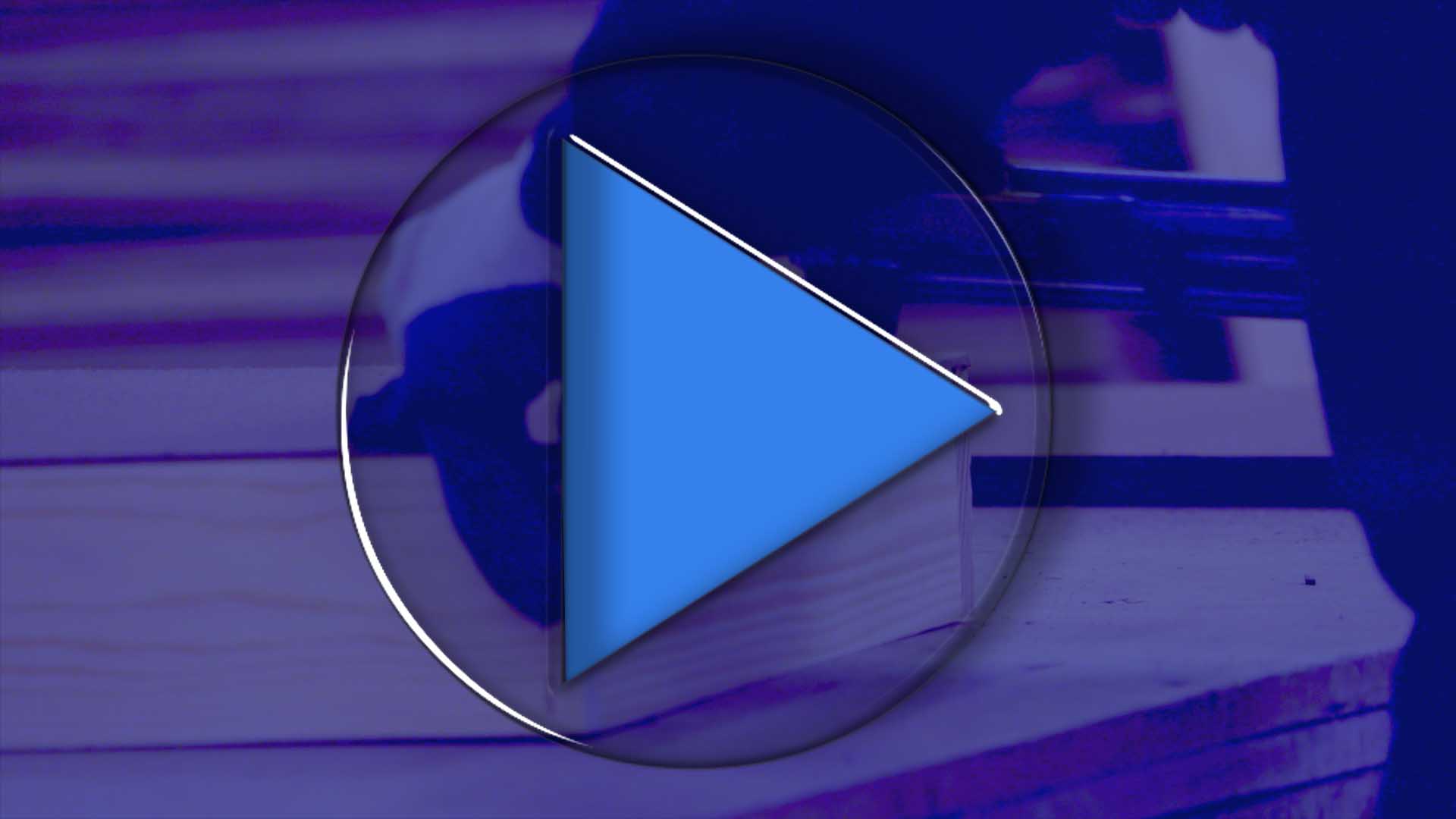 What sets American Crating Company apart from our competition?  Twice the capacity, twice the capabilities, one focus: our customers.  We’ve been delivering quality craftsmanship and on-time crating and packaging for over 40 years.

Got an upcoming project?  We’d love the opportunity to discuss it with you at American Crating Company.  Just give me a call or send me an email.

The end of another year is fast approaching and we all know that means a final rush of orders to be crated and shipped, no matter what.   American Crating Company is here to assist with fulfilling those year-end orders.

However, if you need us on any of those days, we’re available.  A number of our employees have offered to come in and work if our customers need them.  Please let me know if you’ll need us on those days and we’ll be ready.

We’ll stay on the job as late as you need us. Got a job that absolutely has to be out on New Year’s Eve?  Call us and you won’t be worrying about it on New Year’s Day.

Our only job is to make sure you’re successful. Give me a call or send me an email to let us know what we can do to help fulfill your year-end orders.

2015 might just have been our busiest year ever. Besides celebrating our 40th Anniversary, a lot of exciting things happened. Rather than recount them here, I thought it might be more fun to send you this short video:

As you can see, lots of great things happened in 2015 and we’re sure 2016 will be even better. How do we know? Because great customers like you have made every year better than our previous one for 40 years.

We’re grateful for your business and appreciate your loyalty.  If there’s anything we can do for you or to find out more about American Crating Company, give me a call or send me an email. Or click here to find us on Facebook or LinkedIn and Twitter.

“My family lived next door to Mike Park and he offered me a job not long after they started the company,” said Heidler.  ”My summer life guard job had just ended so I figured, why not,” he added.

Nearly 40 years later, Scott has seen just about everything there is to see in this industry.  ”I like to call it the ‘packaging business’ because we do a lot more than just build wood crates,” said Heidler. “One time we built a three story crate out at the Port of Catoosa for an oil platform. It was huge.  It was also really windy and we had to pick up these giant walls with a crane.  But we got it done.”

You can’t ask for anything better in business than excellent, loyal employees.  My father hired Scott over 39 years ago and he’s been one of American Crating Company’s best assets every since.  He brings more experience and expertise to crating and packaging customers than anyone else in this part of the country.

And on a personal note, I just want to say: Thanks, Scott.  I appreciate all you’ve done for our customers and American Crating through the years.

To find out more about what American Crating Company can do for your next project, give me – or Scott – a call or send an email.

You probably know by now that 2015 marks the 40th Anniversary of American Crating Company.  The story of how we got started is similar to many businesses in Oklahoma — a couple of young entrepreneurs saw an opportunity and chased it with everything they had.

In 1974, Gary Fetterhoff and Mike Park (my dad) were employees of a small crating and packaging business in Tulsa.  The owners were not particularly involved, viewing crating as a side business assisting their other companies.

Gary and Mike thought otherwise, feeling through commitment and hard work they could grow the company into a much larger business.

By 1975 they had formed a partnership and approached the owners about purchasing the business.  Over the next few months a deal was struck and the new ownership took control, officially launching today’s American Crating Company.

Gary became the President and Mike the Vice President.  There were no other employees.

Since then we’ve grown to over 60 full-time employees and 2 locations offering round-the-clock service.  We’ve also survived a devastating fire that burned our facility to the ground in the 1980’s, numerous downturns to the economy and the passing of leadership from the original owners to a second generation of family members.

Through it all, two things have remained consistent – loyal customers and committed employees.  I really can’t separate the two, we wouldn’t be anywhere without each of you.  So I will end with this: thank you.  Thank you, customers, for your business and helping us employ great people to serve you year-after-year.  And thank you to our dedicated employees, for taking pride in doing their very best for our customers everyday.

In 40 years of business, we’ve built some big crates at American Crating Company but this might be one of the largest.  Recently, a client needed to ship a massive furnace.

Too large to transport to our warehouse, our crew went on-site along with 1.5 loads of wood.  For comparison, that’s enough wood to build a 1500 square foot, two bedroom house.  The top of the crate alone required 1 full bundle of 1/2” plywood. 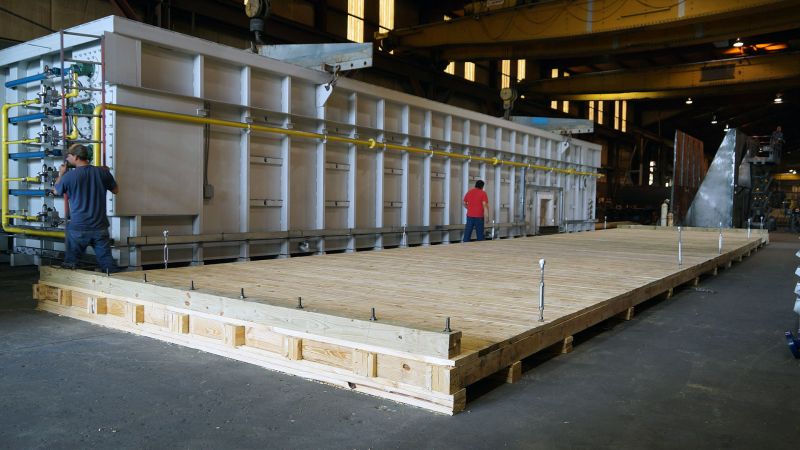 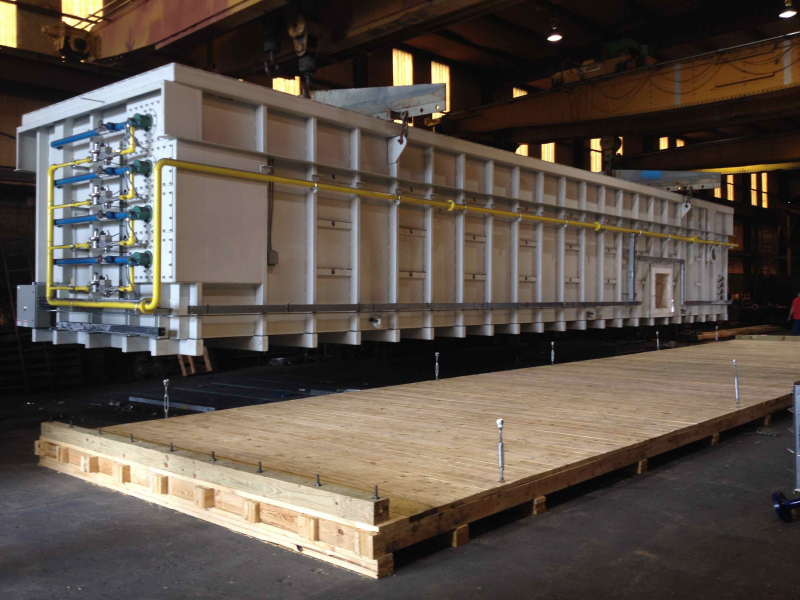 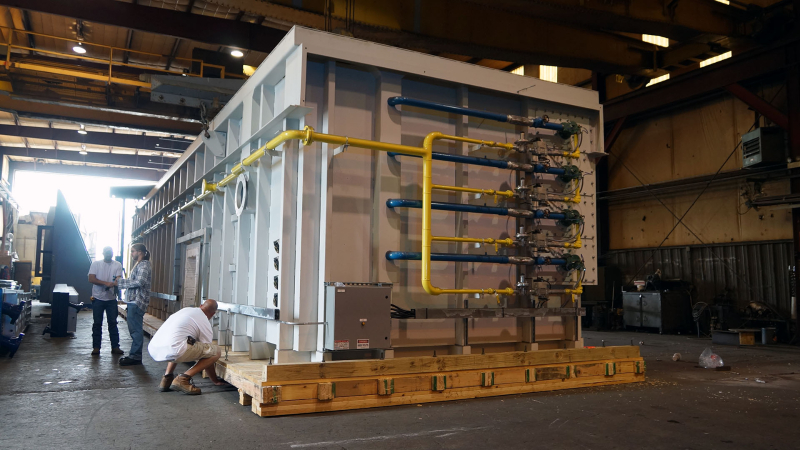 Over 48 hours our crew constructed a finished crate measuring 70 feet long by 16 feet wide by 12 feet tall.  Including the furnace, the crate and cargo was estimated to weigh over 100,000 pounds.  That’s a big crate!

You may never need a crate this large for your products but at American Crating Company, we can design and build the appropriate packaging for any size shipment.

If we can assist you with a project or if you’d like to find out more about American Crating Company, give me a call or send me an email: jpark@americancrating.net.

As we celebrate our 40th year in business, I’ve been thinking about some interesting facts about our company.  For instance, did you know that American Crating Company is one of the largest purchasers of lumber in northeastern Oklahoma?

That’s right, in the average year we likely buy more lumber than any single construction company or hardware store in the state.  In recent years we’ve used on average over 11 million pounds of lumber per year.  That’s 5,500 tons of 2 X 4s and plywood — each year.  That’s over 44,000 pounds per work day and nearly enough wood to lay end-to-end from Tulsa to Dallas and back. 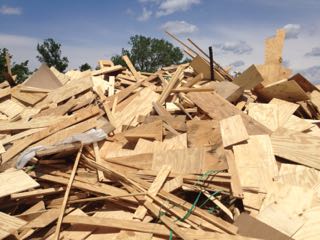 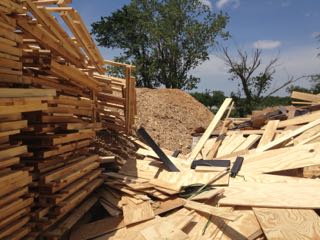 American Crating uses on average more than 11 million pounds of lumber each year. 40 years of that much lumber laying end-to-end would wrap 72% of the way around the Earth

After 40 years, we’ve learned a few ways to best utilize lumber and other materials.  Especially how to use those resources to protect your freight.  Our professional staff handles every job in the most efficient and accurate manner possible.  If we can assist you with a project or if you’d like to find out more about American Crating Company, give me a call or send me an email: jpark@americancrating.net.

By Jeff Park, President
June marks the 40th Anniversary of American Crating Company.  The company was founded 40 years ago this month when two enterprising Oklahomans, Gary Fetterhoff and Mike Park (who just happens to be my dad) purchased a small crating and packaging business.

In the years since, American Crating Company has grown from a small facility in north Tulsa to one of the largest export crating companies in the Southwest.  We now have 2 locations with over 60 full-time staffers and offer 24 hour service everyday of the week.

How did all of this happen?  Well, you made it happen.  Longtime loyal customers have fueled the growth of this company and we are so grateful for your support.

I came across one of our brochures while going through some old files.  From 1980, the brochure describes American Crating Company this way:

“Working as a team, the employees of American Crating combine a wealth of knowledge and skills to offer customers quality packaging at competitive prices.”

I really can’t say it any better than that.  To this day, our experienced professional staff has just one goal – taking care of our customers.

Thank you for supporting us and helping American Crating Company grow.